Sgt Pepper – The Beatles as Apostles of Hope

It has been pointed out that Sgt Pepper (together with the two tracks recorded for it but released separately – Strawberry Fields and Penny Lane) was an album filled with nostalgia.  That is true but it was not the kind of backwards looking sentiment that would normally be implied by this word. 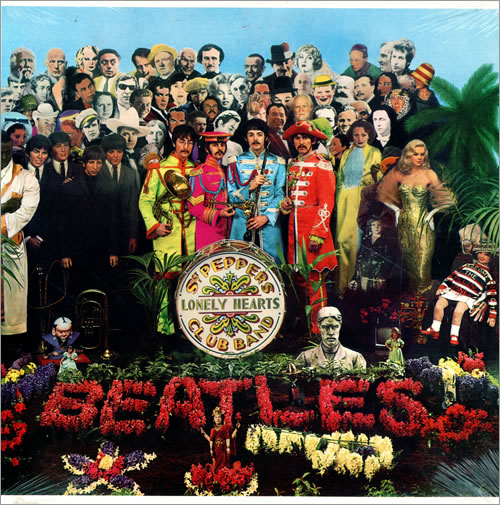 To understand it we need to consider the very particular circumstances in which the album was recorded.  The Beatles had shot from provincial obscurity to world wide fame only four years earlier. They had been ripped out of their working class communities and thrust into a world of adulation that was unprecedented in its scale. They had also recently decided to quit touring. From their formation in the late 1950s they had always been essentially a live band. So they were looking at the world from a place that felt unreal. They could never go back to the life they had grown up to expect, nor could they carry on penning songs about working class boys meeting working class girls, holding hands and getting married. The nostalgia which they could hardly have avoided feeling was not for a bygone past, but for the ordinary life that they knew was still going on around them, but from which they would be forever excluded.

Not that they were complaining about it (or not yet anyway). In the hands of John and George this sense of displacement would soon lead them to write some misanthropic lyrics. George’s ‘Piggies’ was just plain nasty and John’s ‘I am the Walrus’ despite being probably the most far-out pop song ever recorded displayed a persecution complex that bordered on the paranoiac. But on Sgt Pepper, these tendencies were kept in check by Paul’s, sometimes irritating but usually sincere, eternal cheerfulness.

The album is not entirely devoid of nostalgia for times gone by; Victoriana and the musical hall are in there, but like the Kinks their interest in these things was informed by a fascination for traditions that can be disparate in the extreme and which they put together to form some unexpected synthesise – jazz, experimental electronic music, Indian and Western classical music as well as the obvious elements of rock n roll and r’n’b all come together to give us a glimpse into the insatiable curiosity of a group of musicians who just love life’s rich tapestry.

There are some ominous portents here and there, but just enough to give the songs a little extra depth. The spellbinding otherworldly tones of ‘Strawberry Fields Forever’ are matched by the ambivalence of its lyrics. If this is a song about drugs it’s not clear whether it is pro or anti. If it’s just an expression of John’s feelings about life in general it is equally equivocal ‘that is you can’t you know tune in but its all right, that is I think it’s not too bad.’ This uncertainty is repeated on ‘Good Morning Good Morning ‘I’ve got nothing to say but it’s okay’. ‘She’s leaving home’ is both an encouragement for the young to strike out on their own and an indictment of the dull values of the suburban family. ‘Shes leaving home after living alone for so many years.’ And of course John’s admission that the news of a fatal car crash left him unable to stop himself from laughing is unsettling, as is the final synchronised piano chord which tops off the album. In other places the upbeat message is unalloyed – ‘Getting better all the time’, ‘with a little help from my friends’, an idyllic vision of the simple joys of early retirement (‘when I’m 64’) and Paul’s reaction to being given a parking ticket, he doesn’t get angry, he asks the traffic warden out on a date (‘Lovely Rita’). In other places the lyrical imagery is just playful richness in the same way that the sound is.

That the Beatles were attracted to surreal imagery was of course partly down their experiments with mind expanding drugs, but their dabbling into the psychedelic was both a source of inspiration and a reaction to the strangeness of what had happened to their lives. They could never go back and they could never again lead perfectly normal lives, so the everyday filled them, especially Paul, with a yearning that made it seem just as strange as ‘tangerine trees and marmalade skies’.

Paul’s middle eight section on John’s ‘A day in the life’ documents the simple act of catching the bus, an experience that he had said was something he really missed. This appeal of the ordinary and its transformation, for them, into the weird, is perfectly summed up in a line from ‘Penny Lane’ ‘and the fireman rushes in from the pouring rain, very strange’. There is, of course, nothing remotely strange about a fireman rushing into a barber shop to get out of the rain. But to Paul the strangeness was in knowing that he would no longer be able to appreciate such ridiculously ordinary things except in the imaginary world of recent memory.

All of the songs on Sgt Pepper reflect, in one way or another, upon this juxtaposition between the weird and the ordinary; drawing ideas from their own personal experiences. But, of course, the people who went out and bought the album and fell in love with it, knew little about the peculiar conditions that had inspired it’s creation. They loved the richness and newness of its sounds. The lyrical sophistication had lost none of the innocence and wide eyed joie de vivre that had made them so popular in the first place. 1967 was filled with hope. Most people’s lives were ‘getting better all the time’ and had been for more than a decade. The Beatles unabashed celebration of the uncertainty and excitement that the future contained resonated with the whole pop loving world. It was, mores the pity, probably the last truly joyful moment in pop music’s history.

That 50 years later Sgt Pepper is the subject of a more ordinary kind of nostalgia is ironic, given the more optimistic kind of nostalgia that it embodied. The future is not what it used to be and the idea that uncertainty is a thing to embrace and celebrate seems quite alien to us now. But just 20 years before this album was first released the world was recovering from the most destructive war in the whole of human history, so while future orientation may not seem so easy to grasp hold of at the moment we can perhaps enjoy the music of a time when it was all still to play for and look forward to the inevitable return of a few more reasons to be cheerful.